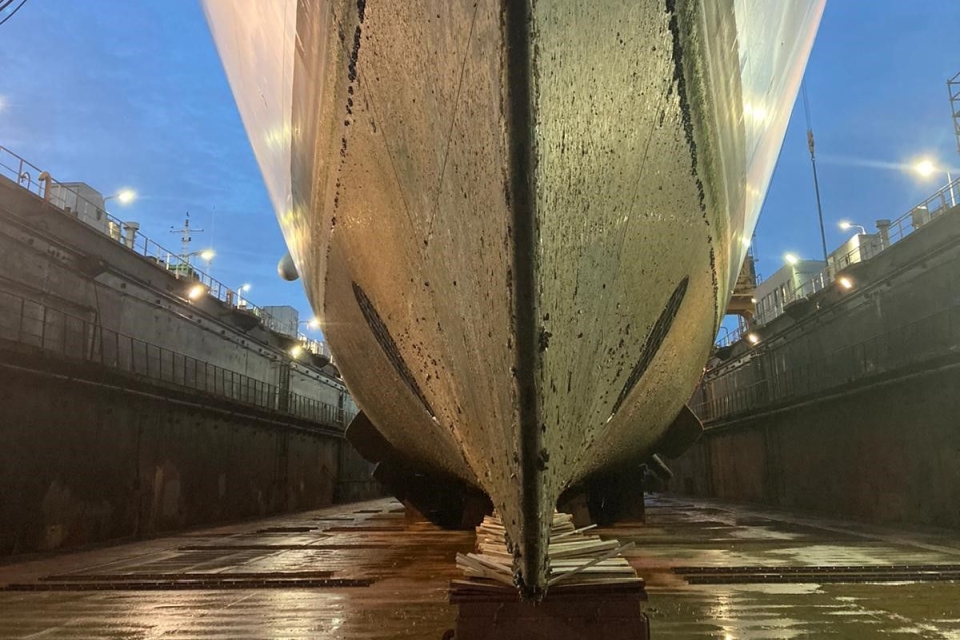 Last week, Royal IHC welcomed back the HNLMS Groningen at the shipyard of Reimerswaal in Vlissingen, the Netherlands. The Dutch Navy’s patrol vessel returned to have a repaired propeller shaft installed.

Back in March, Royal IHC and the Department of Material Maintenance of the Royal Netherlands Navy signed a contract for the docking and repair of HNLMS Groningen. The ship had to break off the deployment in the Caribbean and returned to the Netherlands at the time due to issues with the propeller shaft on the starboard side.

The Dutch shipyard that traditionally specialises in dredgers and offshore vessels, was to coordinate and carry out the inspection of the shaft, and to this end, the ship was docked at the Reimerswaal shipyard in Vlissingen. The project was carried out in two phases. Firstly, the propeller shaft was removed and its associated components disassembled so that an inspection could take place. The patrol vessel then returned to Den Helder.

Now that the propeller shaft had been repaired, the second phase could begin: reinstalling it. As such, the vessel travelled back to Vlissingen for this last week.

Last year, Royal IHC had to be rescued by the Dutch Government after the shipyard got into financial problems. Subsequently, a massive restructuring was announced, which cost 1100 jobs. The shipbuilder then set out a new course in which it planned to focus on the dredging and offshore market. Activities in the (wet) mining and defence markets have been designated as potential core activities, with opportunities to develop further. This project falls into the defence category.

HNLMS Groningen (P843) is one of the four patrol ships of the Holland class. These are flexibly deployable vessels for the surveillance of coastal waters. In addition to anti-terrorism and anti-piracy operations, these so-called ocean-going patrol vessels (OPVs) are also used for counter narcotics operations.