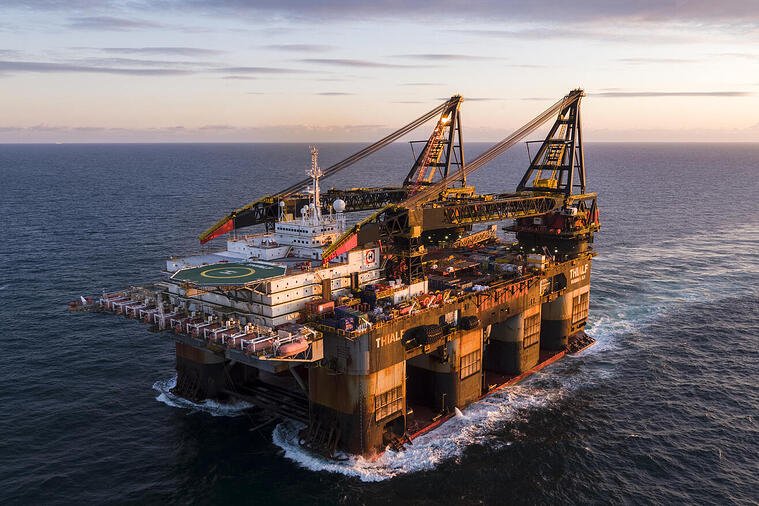 Heerema Marine Contractors’ semi-submersible crane vessel Thialf is capable of lifting 14,200 metric tonnes. In its current form, the vessel cannot pass under Denmark’s Storebaelt Bridge to gain access to the Baltic Sea. To resolve this matter, the ship is undergoing an A-frame modification in Rotterdam.

In 2022, Heerema will be installing 27 wind turbines for Parkwind’s Arcadis Ost I wind farm in the Baltic Sea using the company’s novel Rotor Nacelle Assembly (RNA) installation method. The project will be executed with Thialf, the world’s second-largest semi-submersible crane vessel (only Heerema’s Sleipnir is bigger).

As part of the RNA method, a dummy tower is used to assemble the nacelle and the blades on board the installation vessel. To do so, Heerema has developed the guided root end positioning tool, known as the GREPT. This in-house developed blade assembly tool enables offshore handling and installation of blades safely and efficiently. After assembling the rotor nacelle on the installation vessel, the complete set will be lifted as one piece onto the wind turbine generator tower.

Sounds straightforward, except between Heerema’s home base in the Port of Rotterdam and the Arcadis Ost project location sits Denmark’s Storebaelt Bridge, also known as the Swan. It connects the Danish islands of Zealand and Funen and has a clearance of 65 metres, while from Thialf’s floaters to the top of the vessel’s A-frames is a huge 105 metres.

This resulted in the decision to modify Thialf’s A-frames to access the Baltic Sea without compromising the integrity of the 14,200-metric-tonne cranes.

At the moment, Thialf is moored in the Port of Rotterdam undergoing an A-frame modification. This action is possible as Thialf’s A-frames already have hingable corners that can accommodate the custom-designed semi-permanent adjustment system. Using this system, Heerema can lower Thialf’s cranes and fold the A-frames to create a sufficient air gap between the vessel and the Storebaelt Bridge when combined with ballasting.

The project was a Heerema Group effort as Heerema Fabrication Group’s Opole Yard completed most of the fabrication work. The team fabricated around 150 metric tonnes of structures required for the modification.

The Baltic Sea is a unique region for offshore operations with a heterogeneous seabed profile that includes sand, mud, hard clay, and bedrock. This variety of potential seabed materials can make installations challenging, but Thialf’s floating vessel capabilities mean that it can execute project no matter what’s below. In addition, Heerema says the vessel will increase available lifting capacity in the region by around 10,000 metric tonnes.

All pictures by Heerema Marine Contractors.