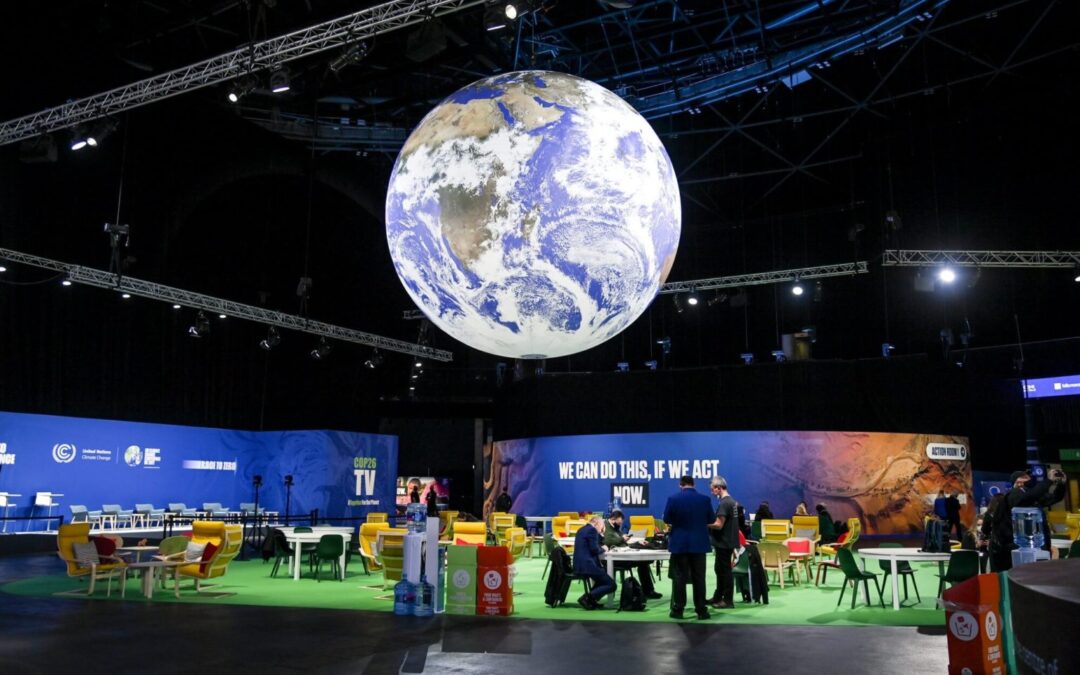 ‘There will always be opposition from groups for whom things never go fast enough, but if one imagines how difficult it is to get a group, let alone the whole world, to agree on one policy, the progress made is rather remarkable and hopeful for the future.’ With this statement, SWZ|Maritime’s editor-in-chief begins his latest opninion piece, in which he goes into COP26 and the role of the US on the global stage.

In every issue of SWZ|Maritime, SWZ|Maritime’s editor-in-chief Antoon Oosting writes an opinion piece under the heading “Markets” about the maritime industry or a particular sector within it. In the November 2021 issue, COP26 takes centre stage.

It has been just three years since the 171 member states of the International Maritime Organization (IMO) reached a hard-fought compromise and agreed on a joint strategy whereby the emission of GHGs (greenhouse gases) in 2050 would be reduced by fifty per cent compared to 2008. And now, at the climate conference of COP26 in Glasgow, awareness and consensus are growing for shipping to reach 100 per cent net-zero emissions. And the reason for this could be the taking office of the Biden administration.

The net-zero strategy for shipping is far from the fierce criticism of environmental NGOs at and after the COP21 in 2015 in Paris when shipping and aviation were left out of the final declaration. On the one hand, the argumentation for this was that there already are two United Nations organisations that govern these industries: the International Civil Aviation Organization for air transport, and the IMO for shipping. On the other hand, everybody knew it would be a hell of a job to come to a globally recognised and supported agreement on the reduction of GHGs from these two global industries.

Also read: ‘In the battle against GHG, the choice for shipping is R&D or taxes’

For a lot of states, especially airlines are a symbol of national pride that they won’t give up easily. And shipping is strategically perhaps even more important as countries need the guarantee that they keep on having access to affordable maritime transport to import food or export their raw materials.

One must understand that countries dependent on the export of raw materials, like coal, iron ore or crude oil, have an interest in the lowest possible costs for shipping their exports to the world markets. Richer countries that can afford higher costs of transport have much less problems with restrictive emission rules. However, the yearly climate conferences keep everybody on their toes and remind them that something must be done. Since 2015, the pressure on the IMO has been rising to take action against the emission of GHGs. But first fierce diplomatic battles had to be fought at the annual meetings of the IMO’s Marine Environment Protection Committee (MEPC).

This contrast continued at the IMO MEPC 72 meeting in 2018 in London. After a week of extensive negotiations, both developing and developed countries reached an agreement to reduce shipping’s GHG emissions by at least fifty per cent by 2050 compared to 2008, while also making efforts to completely eliminate them. This was marked as a historic decision, as the shipping industry aims to align with the Paris Agreement goals.

With great interest, the shipping community had been watching the negotiations in which the IMO MEPC decided to adopt the Initial Greenhouse Gas Strategy to minimise air pollution in line with climate goals as defined in Paris Agreement: limiting global warming to 1.5°C. International sources reported that almost all of the 173 IMO member states supported the draft text and its passage through to committee stage, with only two objections: of Saudi Arabia and the US. On the other hand, Argentina and Brazil had been voicing their objections to the reduction target, but they refrained from voting down the draft text, paving the way for the agreement.

Slap in the face

But this year, the world stage looks distinctly different. Eirik Nyhus, Director Environment for Maritime at DNV, the world’s largest classification society, made quite an interesting, so-called Maritime Impact Podcast about this matter. He noted that with the accession of Donald Trump in the beginning of 2016 until 2020 the United States largely followed a different path. ‘Dealing with climate change was simply not a priority for the previous administration,’ according to Nyhus.

When the United States announced its withdrawal from the Paris Climate Agreement on June 1, 2017, it was seen by many as a slap in the face for the international community. It was not unexpected. The president had been consistent in his messaging both before and after his election, but it had a chilling effect on how the US engaged internationally on climate change at the IMO. The United States became noticeably more low-key in its engagement than under the Obama administration.

But now comes the calm after the storm as it is becoming ever clearer that the Biden administration has taken a very different approach to climate change issues than his predecessor. ‘And we are now starting to see indications of how this may impact shipping,’ DNV’s maritime environment director noted. Nyhus sees a clear change in the US policy.

John Kerry, the US presidential special envoy for climate, announced in April this spring that ‘in support of global efforts to reach zero emissions by no later than 2050, the United States is committing to work with countries at the International Maritime Organization to adopt the goal of achieving zero emissions from international shipping by 2050.’

According to the maritime environmental director of DNV, one very practical consequence of this political shift could already be seen in the run up to the epic 76th meeting of the MEPC this summer, where the US strongly advocated a very significantly strengthened reduction target for the carbon intensity indicator with which every ship will be labelled to see how much GHGs a ship is emitting.

This has been followed up by a proposal to the MEPC77 meeting this month, where the US, along with Costa Rica, Norway and the United Kingdom, proposed that the IMO adopts the 2050 level of ambition of zero emissions from shipping. ‘In simple terms, the US is now adding its significant policy weight to a broad coalition of countries, also including EU members and a number of Pacific island states, all calling for decarbonisation no later than 2050,’ Nyhus said.

At DNV, they believe that the implications for the IMO Greenhouse Gas Strategy review in 2023 will be profound and that we will see a very significant strengthening of the reduction ambitions for international shipping. But being internationally ambitious doesn’t mean that Biden’s policy will also be that effective in the US itself. There the picture is really different and subject to the complexities of US domestic politics, according to Nyhus.

‘First off, and to be clear, at present no domestic US regulations of shipping’s greenhouse gas emissions exist at the federal level. For the moment, DNV simply doesn’t expect to see new shipping related US federal greenhouse gas regulations emerging from the current political battle,’ Nyhus added.

In the meantime, shipping has also been an important issue at the COP26 conference in Glasgow. The role of the shipping industry, as expected, has become one of the topics of discussion. According to a report of the Maritime Executive, during the first days of the conference, the focus returned to the important role of the entire maritime supply chain in meeting the goals of the Paris Agreement.

Led by Denmark, fourteen of the world’s nations took the first step by issuing the “Declaration on Zero Emission Shipping by 2050”. With the signatures of major shipping nations including the United States, United Kingdom, Germany, France, Belgium, Finland, Sweden, Iceland, Hungary and Norway as well as key players in the industry including Panama and the Marshall Islands, the declaration focuses on immediate reductions for shipping to reach zero emissions by 2050.

The initiative aims to build support among countries for this goal at the IMO, which is considering new emissions-cutting measures by 2023. ‘We urge the IMO to take action to set ambitious targets to achieve zero-emission shipping by 2050,’ Danish Prime Minister Mette Freriksen told a news conference at COP26. ‘Carbon-neutral shipping is vital to reach our climate goals.’

The signatories have committed themselves ‘to work at the IMO to adopt goals for 2030 and 2040 that place the sector on a pathway to full decarbonisation by 2050 and to adopt the measures to help achieve these goals.’ To be noted is that countries with a large shipping sector like Greece and Japan did not sign the declaration, nor did the Netherlands.

This reserved attitude of other important shipping nations is undoubtedly prompted by the enormous investments in R&D and the infrastructure to produce alternative zero-emission fuels that will be needed to decarbonise shipping. The International Chamber of Shipping (ICS) has put forward a submission to the IMO for the approval of a USD 5 billion R&D fund, created solely from contributions by the industry.