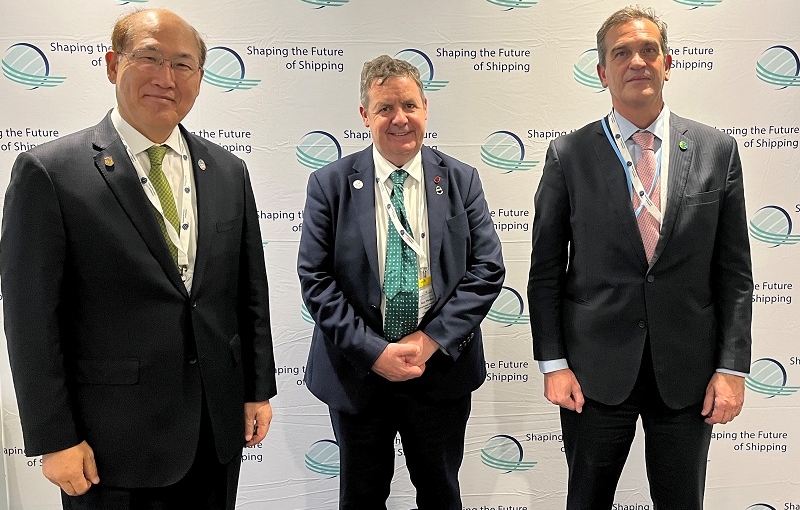 The International Maritime Organization is due to review a proposal to form a USD 5 billion R&D fund at its next Marine Environment Protection Committee to be held right after COP26. In a meeting with the Green Climate Fund (GCF) and the International Chamber of Shipping plans were discussed to kickstart this fund with up to USD 1.5 million from the GCF Project Preparation Facility.

Meeting in the margins of the Shaping the Future of Shipping conference in Glasgow, the Deputy Executive Director of the GCF, the Secretary General of the International Maritime Organization (IMO), and the Secretary General of the International Chamber of Shipping (ICS) met to discuss funding options for the proposed “IMO Maritime Research Fund” (IMRF).

A key aim with the meeting was to develop potential solutions to ensure that developing economies from Latin America, the Caribbean, Africa, Eastern Europe, Central Asia, and the Pacific can access technology and funding for zero carbon ships and the required infrastructure.

Also read: ‘In the battle against GHG, the choice for shipping is R&D or taxes’

The PPF, to be requested by a GCF Accredited Entity to develop the proposal, could be used to pay for the feasibility and governance work required to set up the fund quickly as soon as it is approved by the IMO. The IMRF proposal would provide guaranteed levels of funding to all member countries at no cost to taxpayers, to accelerate the production of zero emission ships.

The IMO is due to review the proposal to form the USD 5 billion R&D programme at its next Marine Environment Protection Committee to be held right after COP26. The USD 5 billion fund would be overseen by IMO and financed through a mandated R&D contribution by ship owners of USD 2 per tonne of marine fuel consumed. The shipping industry wants the fund in place by 2023.

‘In 2019, our industry put forward a proposal to create a USD 5 billion innovation fund to kick start the R&D needed to deploy the technologies required to deliver a zero emissions future. This would not add a penny in taxes and would provide a fund which could be leveraged by industry and governments. This is a no brainer, something that all governments can jump at to send a clear message that the world is serious about the energy transition and climate goals,’ says Guy Platten, secretary general of the ICS.

He adds: ‘I am grateful for the leadership of the Green Climate Fund and their attention given to the initiatives highlighted here at COP26, as well as their interest in supporting the IMO Maritime Research Fund, particularly for developing countries. All the preparation has been done to ensure we can hit the ground running as soon as the IMRF proposal is approved. With the GCF funds we would also have the start-up funds in place. The only thing that can stop us now are member states willingness to live up to the commitments they are making here in Glasgow.’