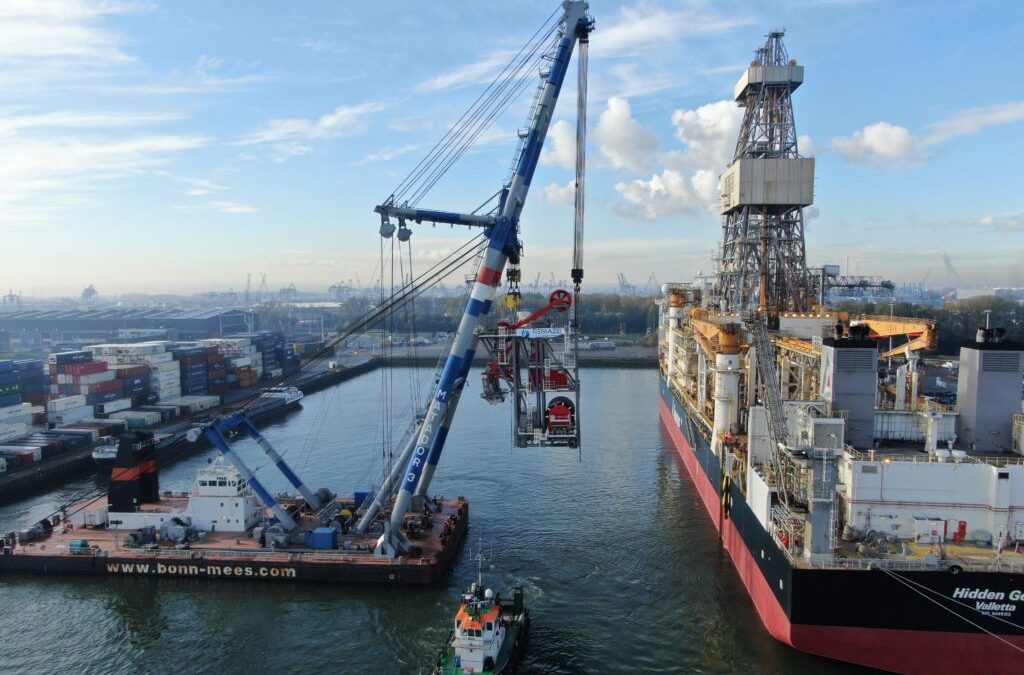 Allseas is currently converting the former 228-metre drill ship into its first polymetallic nodule production vessel Hidden Gem. Works include installation of the vessel’s launch and recovery (LARS) system. Allseas’ engineers designed the system to safely deploy and control the 12-metre nodule collector vehicle as it moves across the seabed 5 kilometres below the surface.

Lying on the deep-ocean floor, polymetallic nodules are rich in critical metals required for energy storage and renewables technologies. Deepsea nodule collection represents a new frontier and Allseas has been developing the needed technology over the past few years.

Drawing on the company’s deep-water expertise and innovative capability, Allseas designed the LARS for efficient, high performance operation in the world’s deepest and remotest environment. Fitted with a mix of winches and compensators, and housing the control umbilical, the system plays a critical role during offshore operations.

In parallel, Allseas is still working on the airlift system that will transport the nodules to the surface. This 4.5-kilometre-long riser, will be deployed from the Hidden Gem and connected to the collector vehicle via a shorter flexible hose. The mineral-bearing nodules are separated from sediment inside the collector vehicle and floated up the riser pipe to the surface. The nodules will then be transferred from Hidden Gem onto cargo vessels for transportation to shore.

The Hidden Gem is to carry out a collector “wet-test” in the Atlantic at the end of 2021 and pilot mining tests in the Pacific, 1200 nautical miles west of Mexico, in 2022. After the pilot mining tests in 2022, the vessel is expected to enable first commercial production for The Metals Company in 2024.