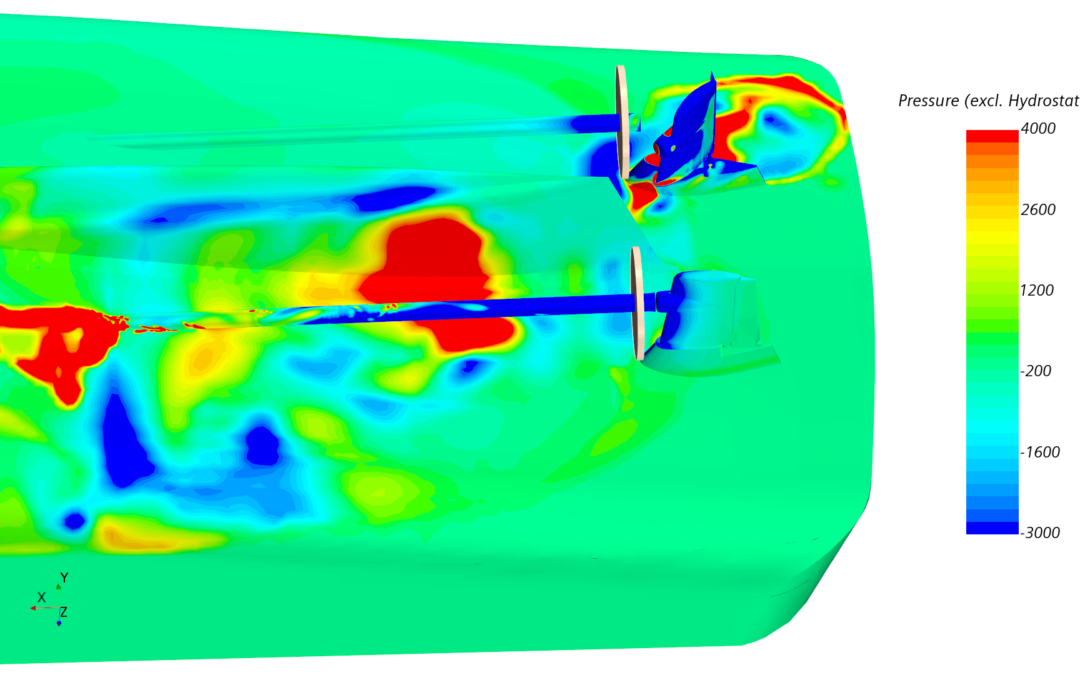 In two recent cruise ship projects, work by consultancy Foreship to optimise vessel crabbing included a review of some of the ship response assumptions on which naval architects base their design advice. Some of the results demonstrated what ship captains have suspected all along: sometimes, there really is no substitute for experience.

However, with other parts of the modelling also revealing room to optimise even time-honoured ship handling methods, Foreship head of hydrodynamics, Janne Niittymäki (pictured) says latest CFD analysis should open a new dialogue between captains and naval architects. Better aligning physics and the physical world can only benefit both, he says, especially since the simulators captains train on before taking over a new ship use crabbing inputs that are far from realistic.

‘It is inevitable that a captain basing his manoeuvring decisions on experience with an individual ship will believe his/her handling is “more correct”, but there is no reason why one skill should not inform another,’ Niittymäki explains. ‘Advances in CFD make it easier than ever to add data to simulations, either to verify what the captain is saying or to model ways of fine-tuning operations.’

A necessary dialogue on crabbing has been sorely lacking, Niittymäki says. ‘Crabbing specifications use rule of thumb calculations based on windspeed limits and deep-water. This takes no account of the realities of applying side forces in shallow waters or the interaction of different thrust forces.’

A captain will be aware of the ship’s general specifications, but will make adjustments in harbour conditions based on trial and error, rather than bridge simulator training.

‘Actually, underwater forces in harbour manoeuvring can now be determined reliably and quickly using full scale CFD simulations,’ says Niittymäki. ‘What is new in our method is that interactions between thrusters, main propellers, rudders, pods, etc., is considered automatically. This is useful for dimensioning or positioning equipment, but also suggests a discussion between the naval architect and the captain would be beneficial at the design stage – especially for the shipowner.’

Outputs could also be useful to captains seeking to make better use of installed equipment, says Niittymäki. For owners, cutting manoeuvring time in the harbour could support more cost effective slow steaming.

Meat of the matter

The new modelling from Foreship uses state of the art CFD methods included in Star-CCM+ software, simulating only acting forces to establish new levels of wake field accuracy in the propeller plane. Using propulsion actuator discs to create disturbance on the water that are tuned based on real propeller open water curves (Kt & Kq), simulations are applied to harbour conditions to provide a realistic picture of force interactions in crabbing operations.

Niittymäki explains that knowing the level of power needed for crabbing mode will allow the owner to make accurate decisions on the number and combination of thrusters needed and the wind limit for entering and leaving piers at specific harbours. The ship operator can harvest detailed guidance – on the optimal manoeuvring set up, for example, or on whether to use stern thrusters alone or in combination with the main propeller and rudder. Shipyards and suppliers are also better informed on crabbing power needs and how to locate stern thrusters to minimise negative interactions, or what type of rudder to apply.

In a favourable turn of events where breadth of experience is concerned, the two simulation projects involved one example of a ship using a conventional shaft line and another evaluating podded propulsion.

In the case of podded propulsors, simulations modelled pod angles when crabbing with one or two pods. Niittymäki reports positive feedback from a captain consulted that were in line with manoeuvring expectations for different ports.

Where twin pod use was simulated, modelling offered guidance on the optimum combination for side and longitudinal forces in crabbing mode, as well as operational range recommendations and restrictions to avoid possible damage or unnecessary noise and vibrations.

In the twin shaft line propulsion set-up, simulations set out to consider whether propellers should rotate inwards or outwards over the top , and to consider whether using the port or starboard side rudder would optimise side force. Here, Niittymäki is candid enough to admit that simulated manoeuvres for leaving the pier and unrestricted manoeuvres in shallow and deep waters confounded the expectations of naval architecture and confirmed nuanced views often heard from captains.

‘On the face of it, the best way to leave the pier is not obvious, as assumed by most naval architects. The owner said it had been experiencing issues on this topic for five years and would have had fewer grey hairs if this type of tool had been available all along.’

Olli Somerkallio, chief operating officer at Foreship, says the modelling procedure is entirely new and could be developed for crabbing optimisation for any ship, with non-typical hull forms likely to secure particular benefits.

He says: ‘In the case of non-conventional hull forms, like double-enders, crabbing performance can be difficult to predict using conventional methods. What are the consequences of increasing thruster power or the torque of the main propellers, extending the central skeg, increasing the rudder area or adding rudder end plates? We can also model the impact of increasing side force by ten per cent on the rudder. This could potentially support better decision-making or provide an additional training tool for harbour manoeuvring.’

Niittymäki says that their simulations also show when seafaring instincts can be “wrong”. ‘In the case of ferry manoeuvring, for example, we know that captains generally prefer to rely on stern thruster alone, when using the high-lift rudder is more efficient. These simulations can prove it to them.’

Longer term, greater accuracy in harbour manoeuvring would seem to be a prerequisite to support
the wider use of automated docking systems, Somerkallio observes. ‘It’s critical to understand how propulsion and manoeuvring systems interact with the hull: automating this part of operations needs to be based on physics, not on gut feeling.’

One very useful human characteristic is the ability to change tack if the original approach is not working, Niittymäki concludes. ‘As CFD modelling advances, it is no problem if the simulations show that I am wrong and that the captains are right: why wouldn’t I believe them? But every ship is different and there is always something more that can be optimised; captains can be “wrong” too. I believe we are the first – and for now the only company – offering this analysis. We are also ready to open what we consider to be an important new dialogue.’

This article was submitted to SWZ|Maritime by Foreship.