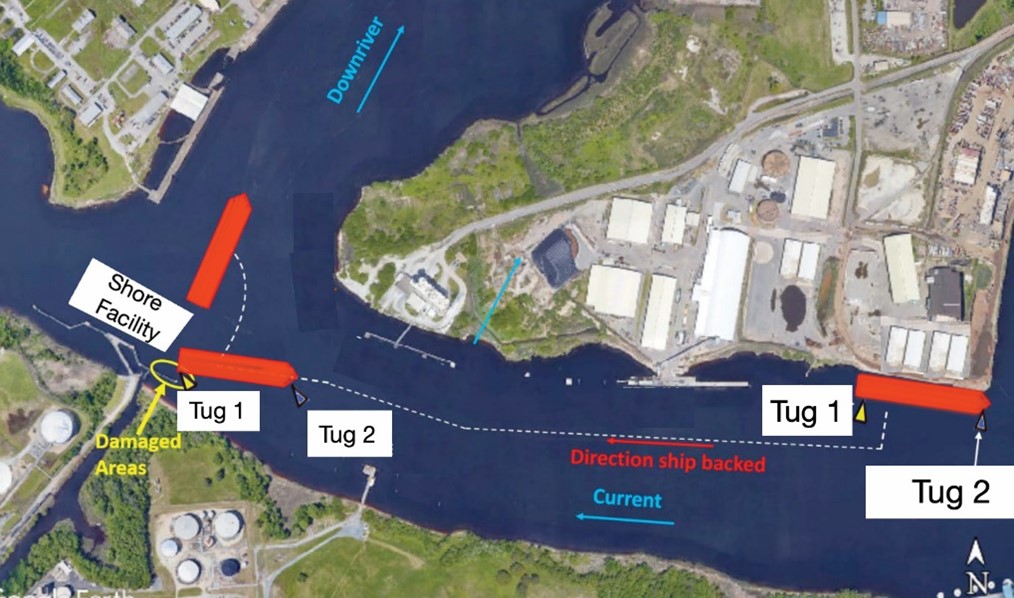 When undertaking familiar tasks with unaccustomed equipment it may be wise to step back and re-evaluate the risks and procedures. The Nautical Institute issues this warning in its latest Mars Report in which a tug was pushed onto a shore facility. In this case, different tugs than usual were used for the manoeuvre.

A bulk carrier was departing port with a pilot on the bridge to assist with the undocking and manoeuvre downriver. The operation was also assisted by two conventionally propelled tugs, one forward and one aft. The docking pilot did not discuss his undocking plan with the master, nor did he give the tugmasters direct information on the manoeuvre. The usual practice was to back vessels downriver to the turning basin under tug guidance, turn the vessel approximately ninety degrees and then proceed downriver. Lines were cast off and dead slow astern was given.

As the manoeuvre progressed, the backing speed increased to about 2.9 knots. The aft tug (tug 1 in the diagram) was pushing at full power in an attempt to push the vessel’s stern north, away from the shore facility. As the bulk carrier and tug approached the shore facility astern, the pilot requested that tug 1 stop pushing and that it be brought close by the bulk carrier. The tugmaster complied. By now the astern speed had reached 3.2 knots and the vessels were backing quickly into a shore facility. The pilot made several ahead engine orders to try to save the situation in addition to hard starboard rudder.

These actions did not prevent the bulk carrier from squeezing the tug into the shore facility, striking a concrete pile for a mooring dolphin and then a walkway. Although damage to the tug was minimal, the shore facility suffered about USD 1.47 million damage.

It transpired that conventionally powered tugs were not normally used for this manoeuvre. Instead, the norm was to use more efficient tugs with 360-degree azimuth power. The official investigation also found, among other things, that the speed at which the assisted vessel was being backed was too high for conventionally powered tugs to be used in an effective manner, resulting in contact with the shore facility. Another contributing factor was the less than adequate communication between the docking pilot and the bulk carrier’s master and also the tugmasters.

In addition to the advice given above, The Nautical Institute also stresses that communication is key. ‘Everyone involved should have the same understanding of the manoeuvre.’

This accident was covered in the Mars Reports, originally published as Mars 202135, that are part of Report Number 345. A selection of this Report will also be published in SWZ|Maritime’s September 2021 issue. The Nautical Institute compiles these reports to help prevent maritime accidents. That is why they are also published on SWZ|Maritime’s website.