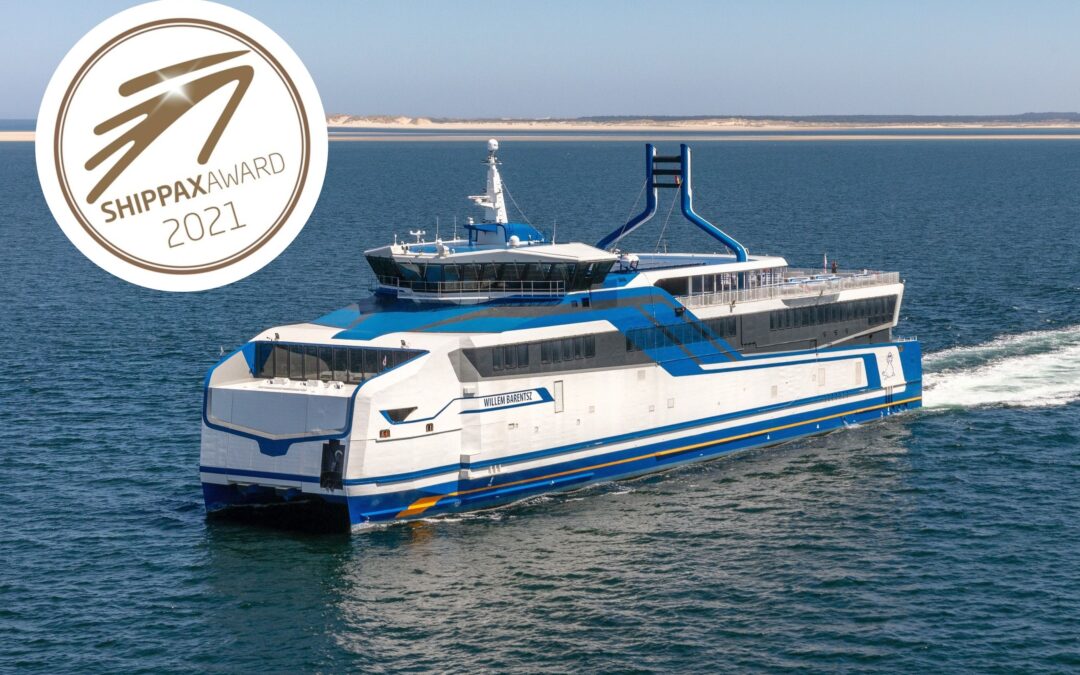 The Willem Barentsz, the first LNG ferry in the Netherlands, has won the international Shippax Technology and Design Award 2021. The jury praised the LNG propulsion system, the heat recovery system and its solar panels.

The ferry Willem Barentsz is operated by Rederij Doeksen and sails between Harlingen and the Dutch Wadden Islands Vlieland and Terschelling. Both this ferry and its sister vessel Willem de Vlamingh sail exclusively on LNG. The ferries carry 700 passengers and 61 cars per crossing.

The jury said about the Willem Barentsz: ‘With the shallow Wadden Sea (UNESCO World Heritage Site) as its working area, ecological sustainability is central to the design of the 70.65 metres long and 17 metres wide catamaran Willem Barentsz. The ship is powered by two 1492 kW MTU high-speed LNG engines driving Veth azimuth thrusters. A 46-m3 LNG tank is located in each hull.’

The jury also praised Orcan heat recovery system, which is part of the hybrid package and converts waste heat into mechanical power that is used to charge two battery packs that drive the bow thrusters. In addition, the ship has solar panels that provide part of the hotel load.

‘The compact Willem Barentsz is not only the best and most economical ro-pax ferry in its class ever designed for the Wadden Sea, but is also a true boutique ferry with attractive design elements typical of the area in which it operates. Thanks to large windows wrapped around the salon deck, the main passenger deck merges with the unique seascape,’ concludes the jury.

Shippax Awards have been presented since 1996 as a distinction for special innovations and exceptional design in the ferry world. Rederij Doeksen has been honoured with an award once before. In 2006, the ms Vlieland received the Shippax Award for Ferry Lounges. The award-winning ships were all delivered between 1 January and 31 December 2020.