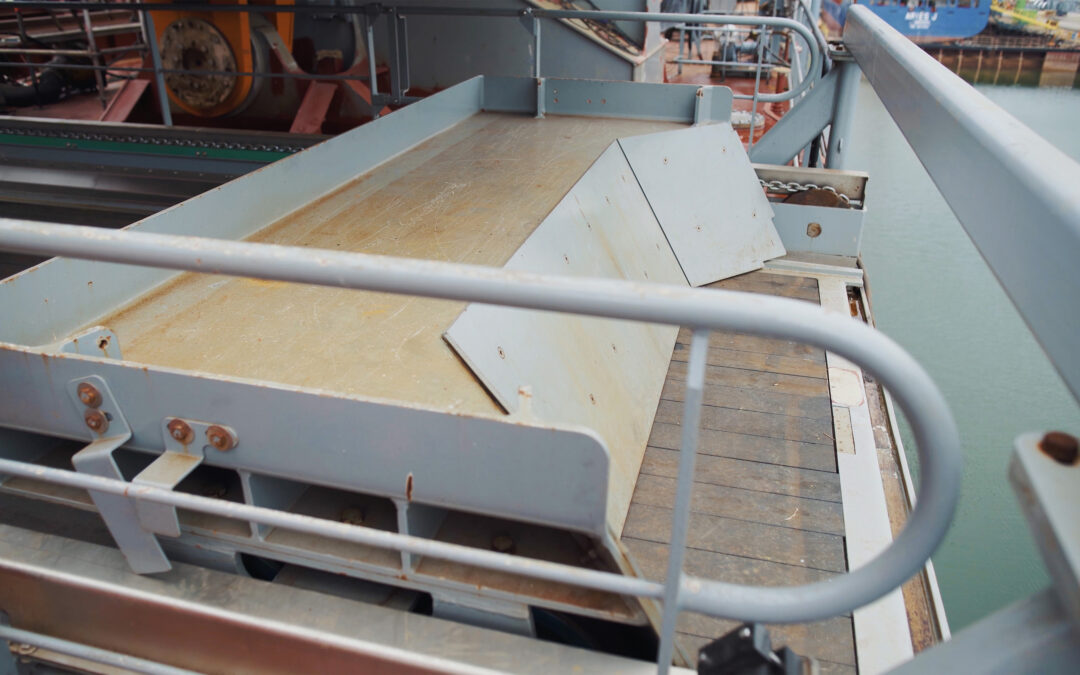 A debris removal platform has been installed on board Van Oord’s vessel Vox Amalia. The system safely removes debris that will fall onto the deck after recovering the draghead of a trailing suction hopper dredger. A bulldozer blade pushes the debris overboard.

During dredging, debris can fill the trailing draghead of a trailing suction hopper dredger. When the suction pipe is brought back on board, debris that was trapped in the draghead will then fall onto the deck. This debris can range from large boulders to sticky clay and needs to be removed from the vessel.

The debris removal platform has performed this task since 2020. While developing the platform, the aim was to increase safety for the vessel’s crew. A bulldozer blade, driven by RUD Tecdos chains, simply pushes the debris back into the sea, at the touch of a button. So far, the Vox Amalia is the first vessel in the Van Oord fleet to be fitted with the system.

‘This debris removal platform has given us a safe and effective way of removing debris from the vessel,’says Maarten van Duijn, Technical Superintendent at Van Oord. ‘This innovation has reduced the risk of harm to the crew working on board considerably. By taking safety into consideration in the design phase, hazardous working conditions during operations can be eliminated or significantly reduced. This is the most effective way of risk control.’

On the Vox Amalia, the bulldozer blade is moved by RUD’s Tecdos Pi-Gamma chain drive solution. The 2-in-1 chain drive solution was developed specially for vertical and horizontal applications and has a chain loop angle of between 90° and 180°. On Van Oord’s Vox Amalia, it is being used with a 180° chain deflection. The drive system installed on the vessel can handle loads of up 13 tonnes.

‘The drive system in use at Van Oord is, generally speaking, a standard application,’ explains Heribert Herzog, Design Engineer and Applications Engineer in RUD’s Conveyor & Drive division. ‘The chain sprocket, which has 14 teeth, had to be a bit bigger than usual, as the distance between the chains was fixed by the options for attaching them to the bulldozer blade.’

The drive solution is based on a high performance round link chain. The chain runs over a drive shaft that is completely free from other forces. Both the round link chain and the chain sprockets used by Van Oord have been manufactured from case-hardened steel, for use in a maritime environment.