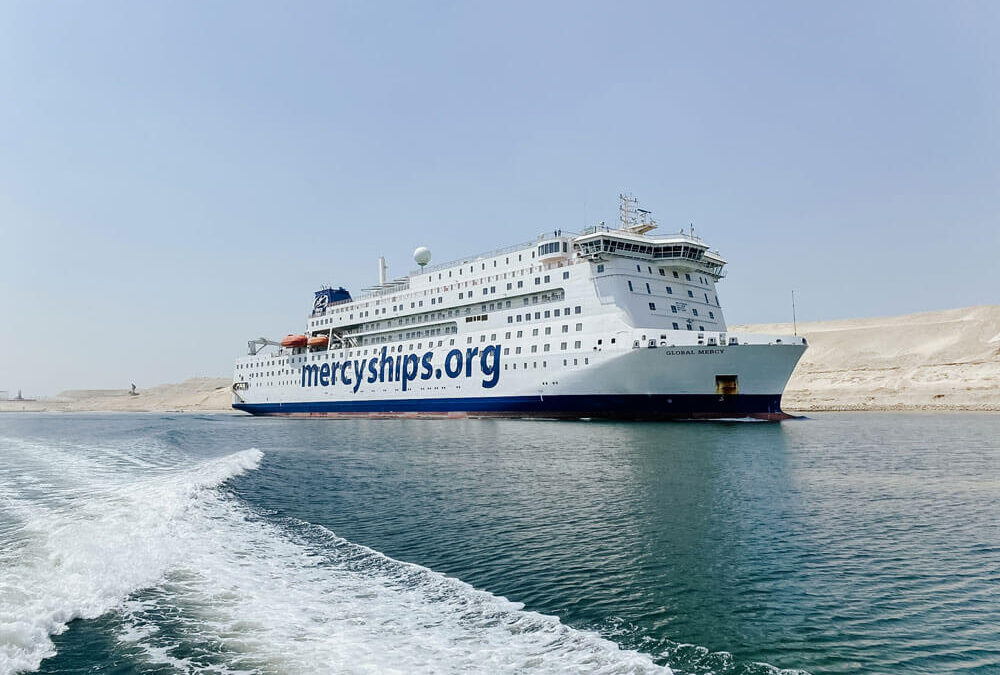 The Global Mercy, the new ship of Mercy Ships, has completed its journey through the Suez Canal en route to Antwerp. After a short courtesy visit in Malta, the ship is expected to dock in the Port of Antwerp on the weekend of 12 September. There, the ship will be further equipped and crewed.

The largest private hospital ship in the world departed from shipyard China State Shipbuilding Corporation (CSSC), Tianjin, China, at the end of July and had to pass the Suez Canal on its way to Europe. The Senegalese and Egyptian governments facilitated the passage of the Global Mercy through the Suez Canal on 28 August free of charge.

‘On the initiative of and led by President Macky Sall of Senegal together with an active involvement of his ambassador in Brussels, the President and the authorities of Egypt have agreed to guide the Global Mercy through the Suez Canal free of charge and without any cost to the charity,’ says Bert van Dijk, international board member and president of Mercy Ships Belgium. ‘This is a wonderful example of a unique collaboration between two heads of state to support Mercy Ships and contribute to the improvement of healthcare in Africa.’

The Port of Antwerp has made the arrival of the Global Mercy in Antwerp possible by offering a free berth and support. Volunteers from home and abroad will set up and finish the Global Mercy. This includes the installation of medical equipment and IT systems, as well as the supply and crewing of the ship for its first mission.

The Global Mercy will be the “partner ship” of the current hospital ship, the Africa Mercy. Mercy Ships expects to more than double the impact of its work with the new vessel, both with life-changing operations and with education and training of local caregivers in the poorest countries in Africa.

During its missions, the Global Mercy can accommodate 950 people, including 641 crew members, who consist of volunteers from all over the world. In addition to the hospital, the ship also has first-class training facilities with which Mercy Ships contributes to the sustainable development of local medical care in many countries.

The Global Mercy is a unique ship in the passenger class: 174 metres long, 28.6 metres wide and a gross tonnage of 37,000. It has six operating rooms, 200 beds, a laboratory, general outpatient clinics and eye and dental clinics. The total area of the hospital department is 7000 m².

In the spring of 2022, Mercy Ships plans to open the ship to the public for tours in Rotterdam, the Netherlands, before beginning active service in Dakar (Senegal), the first of many new missions in the next fifty years.

Picture: The Global Mercy transited the Suez Canal free of charge on 28 August 2021 thanks to Egyptian authorities (by Suez Canal Authority).