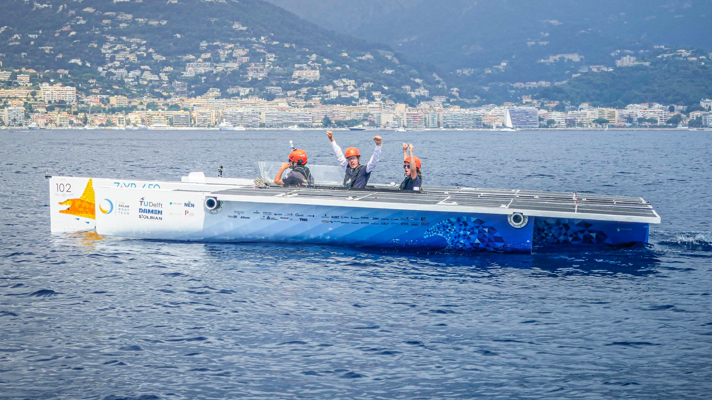 After losing their hydrofoil two weeks before the World Championships in Monaco, the students of the TU Delft Solar Boat Team still managed to take the title last Saturday. It was the first time the team built a solar-powered boat for the open sea.

The TU Delft team sailed two different races. A shorter race of thirty kilometres on Friday during which the team was able to reach very high speeds and even set a new speed record for the boat of 35 kilometres per hour. The team came in third.

After finishing on Friday, the team encountered a problem with the connection-wires of the solar panels causing the panels to overheat. The heat damaged certain electrical systems that could not fully be repaired in time for the second race. To prevent any further damage to the boat and to ensure the safety of the pilots, the team decided to start the longer race on Saturday (sixty kilometres, from Monaco to Ventimiglia and back) without its solar deck and sail on batteries alone. Yet, the team still managed to win the race.

The team suffered more setbacks over the past weeks. During a test run on 21 June on the Dutch IJsselmeer, the boat lost a hydrofoil. This wing lifts the keel above the waterline to make it easier to sail over waves. As the wing was lost in the IJsselmeer and there was no time to make a new one, the boat competed in Monaco without its hydrofoil.

The TU Delft Solar Boat Team 2019 consists of 28 students. In the past, the team participated in races on inland waterways, but the race in July was the first time on the open sea.

At the end of July, the team hopes to set a world record with the same boat, by sailing across the Channel from Calais in France to Dover in England as fast as possible. In order to do this, the students will investigate whether they can build new hydrofoils in time. Although not a must for the attempt, they do significantly reduce resistance in waves.