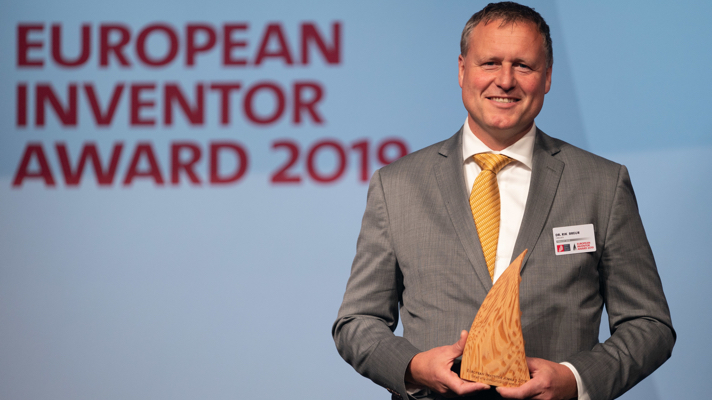 The European Patent Office (EPO) has presented Dutch materials scientist Rik Breur with the European Inventor Award 2019 in the Small and Medium Enterprises (SMEs) category. Breur has developed a non-toxic wrap for marine structures and ships that prevents biofouling.

Breur’s adhesive wrap, marketed as Finsulate Antifouling, has been inspired by spiny surfaces found on animals such as sea urchins and stops biofouling – the growth of unwanted marine life from fixing to surfaces of platforms and boats. The presence of these organisms can damage marine platforms and increase fuel costs for vessels due to the drag caused when levels build up. This means the fibre coating improves fuel efficiency. In addition, it is also an environmentally-friendly alternative to toxic paints.

Text continues after the picture

Close-up of the antifouling wrap.

'By taking inspiration from nature and applying his scientific expertise, Breur has developed a solution that benefits both the maritime sector and the marine environment,' said EPO President António Campinos. 'Breur’s story also shows how protecting intellectual property rights can benefit SMEs. He patented his invention early on, giving him and his one-man company the necessary credibility from his backers to turn his innovation into a business.”

Breur received the award during a ceremony at the Wiener Stadthalle in Vienna on 20 June. The European Inventor Award is presented annually by the EPO to distinguish outstanding inventors from Europe and around the world who have made an exceptional contribution to society, technological progress and economic growth. The finalists and winners in five categories (Industry, Research, SMEs, Non-EPO countries and Lifetime achievement) were selected by an independent international jury from a pool of hundreds of inventors and teams of inventors put forward for this year's Award.

Picture: Rik Breur, winner of the European Inventor Award 2019 in the SMEs category, at the award ceremony in Vienna on 20 June 2019.