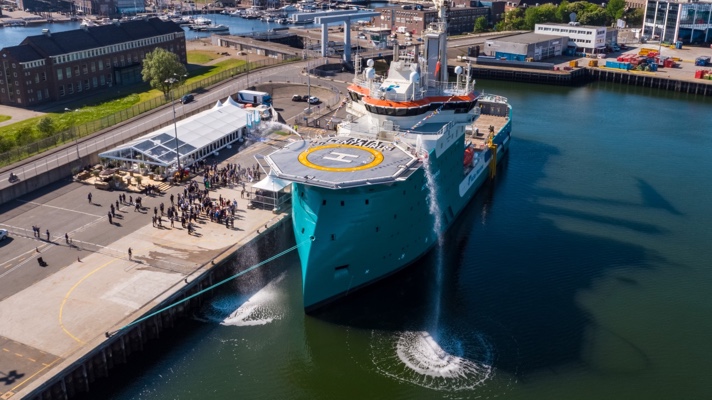 Acta Marine has named the latest addition to its fleet, the Acta Centaurus. The Walk-to-Work Construction Support Vessel will mostly be deployed for offshore wind projects, the first of which will be the Deutsche Bucht offshore wind farm.

After taking delivery from Ulstein Verft, Norway, at the end of April 2019, the Acta Centaurus made its maiden voyage to Den Helder. The naming ceremony took place on Wednesday 22 May in Den Helder, the Netherlands, and was performed by Mrs. Marianne van Oord. The vessel is named after one of the stellar constellations in the northern hemisphere, Centaurus.

Currently, the vessel is being made ready for its first assignment in offshore wind. The Acta Centaurus will soon mobilise for the start of its charter with MHI Vestas Offshore Wind to support the installation and commissioning of 33 V164-8.4 MW MHI Vestas turbines at the Deutsche Bucht offshore wind farm in the German Exclusive Zone.

Acta Centaurus is a sister vessel of Acta Marine’s Acta Auriga which has been delivered in 2018 and has worked non-stop on the BARD1 Offshore Wind Farm. The successful concept has resulted in the addition of the second Ulstein built vessel. These vessels are jointly developed with Ulstein SX195 design features, an SMST 3D-compensated gangway, and a 6 ton 3D-crane as well as the special Ulstein X-Bow and X-Stern that optimise the overall seakeeping and workability of the vessel. The vessel has a 120 persons capacity and a helideck. In addition, the Acta Centaurus will be outfitted with a hybrid battery package to further reduce fuel consumption and with that contribute to a lower CO2 footprint.