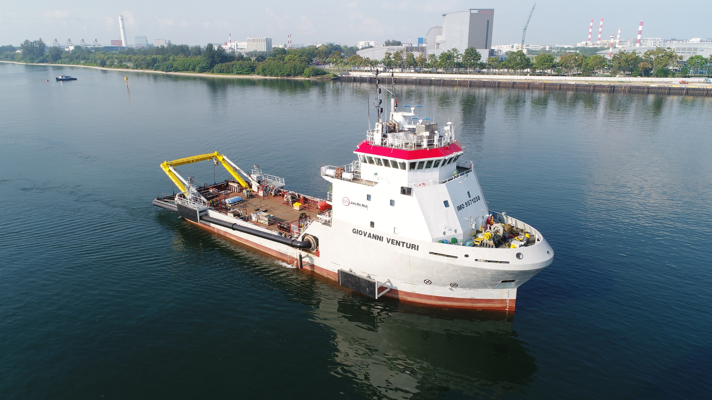 The Giovanni Venturi is the first out of three water injection dredgers (WIDs) to be delivered by PaxOcean Shipyard. Jan De Nul Group recently purchased three offshore supply vessels and ordered the Singaporean shipyard to convert them into seagoing WIDs. The Giovanni Venturi will be mobilised to its first project in Argentina. The other two WIDs Henri Pitot and Henry Darcy are in the process of being converted and will be delivered later this year.

Jan De Nul Group is continuously investing in its fleet either with new builds or through acquisition. In the summer of 2017, the multi-purpose vessels Adhémar de Saint-Venant and Daniel Bernoulli were completed in China.

In 2017, the company also ordered three hopper dredgers, two with a capacity of 6000 m³ each and one of 18,000 m³ with scheduled deliveries at the end of 2019 and in 2020. The smaller hoppers will be built at Keppel Offshore & Marine in Singapore, the larger in China by COSCO.

In August 2017, what will be the company's largest self-propelled cutter suction dredger, the Willem van Rubroeck, was launched, the construction of which is still ongoing.

In 2018, three hopper dredgers with a capacity of 3500 m³ each, named after the Portuguese explorers Afonso de Albuquerque, Diogo Cão and Tristão da Cunha, were built at Keppel Singmarine in China. The last one hit the water in September 2018 and is to be delivered in the first half of 2019.

The WIDs are fitted with power jetting systems used for the low-pressure injection of water into sediments. By doing this, the sediments fluidise and naturally move, just above the seabed, through natural sediment streams. They also have Dynamic Positioning (DP), swell compensation for stable working conditions at sea, and diesel-electric drives reducing considerably the CO2 emissions.

These vessels are smaller than traditional dredgers, and have high manoeuvrability and a limited draught. This type of dredger is perfectly suited for maintenance dredging works in smaller ports, but also for other services such as levelling the seabed for other installation services or for post-lowering of pipelines and cables in the seabed.

No Transportation of Sediments

Contrary to the traditional dredging methods where sediments are mechanically transported, water injection dredging does not remove the sediments. Water is injected, sediments fluidise and nature takes care of the sediment transport. The sediments stay in their natural environment by only moving horizontally, just above the seabed. The process does not impact overlying water layers.

The fact that the sediments do not need to be transported by means of a hopper, barge or pipeline, turns water injection dredging also into a cost-efficient dredging technique.