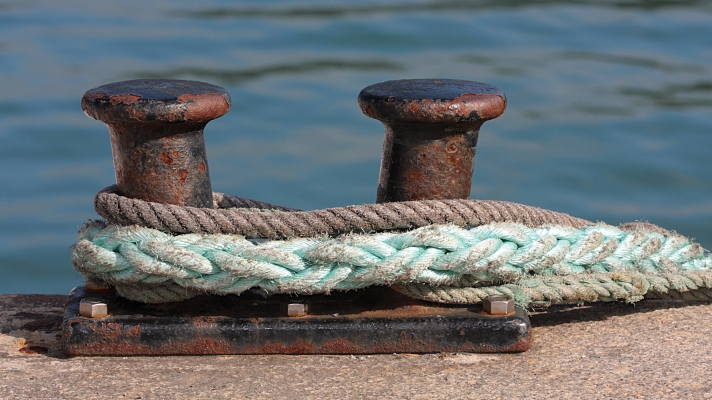 (MARS 201870) A vessel was in the final approach to mooring, parallel to the berth, and two tugs were ordered to push against the vessel’s hull.

The forward mooring party had deployed two spring lines, which were both placed on the same bollard by the linesmen. The lines were passed through different fairleads on the port bow and winched by the vessel’s port mooring unit on the inner and outer drums.

Initially, the two lines were kept loose between the dock and the vessel, as the ship had not yet reached its final position. Once in position, the master ordered the officer in charge (OIC) to tighten the spring lines to keep the vessel in place. Both spring lines were pulled taut with the port mooring unit, stopping the vessel’s motion. The two tugs were continuing to push on the vessel so that it maintained contact with the rubber fenders dockside.

Caught on a Fender

The spring lines were under increasing tension, and the linesmen heard the typical sound of synthetic ropes being stretched. The linesmen noticed that the mooring lines were caught on a fender, and were not leading in a straight line from the vessel’s fairleads to the dock bollard as they would normally. They informed the ship’s bridge team by VHF radio.

The information was relayed to the OIC. He leaned over the vessel’s side to assess the status of the mooring lines and then ordered the mooring party to heave on the winch to put more tension on the lines.

The pilot ordered the forward tug to stop pushing. A few seconds later the vessel’s bow started to shift sideways and away from the dock’s fenders. One of the linesmen on the dock shouted to back away from the handrail. The OIC moved back for a few seconds, but then came forward and leaned over the handrail again to look down at the point where the spring lines were catching. Suddenly, the two spring lines came free of the fender and sprang upwards like a slingshot. One line went well above the handrail, hitting the OIC on the chin. He fell unconscious to the deck.

Although the victim was quickly brought to the hospital after the accident he succumbed to his injuries and was pronounced dead.

This is one of the November MARS Reports that are part of Report Number 313. A selection of this Report has also been published in SWZ|Maritime’s December issue.