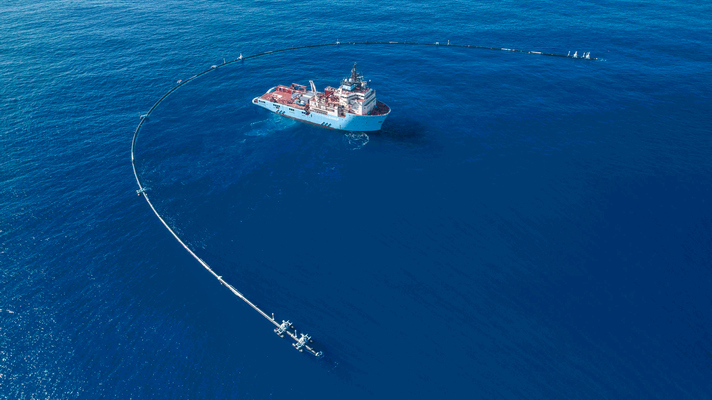 After two weeks of intensive testing, The Ocean Cleanup announced a "Go" for System 0001 to continue to the Great Pacific Garbage Patch.

On the 16 October, the Dutch "plastic catcher" arrived at the deployment location in the heart of the Great Pacific Garbage Patch, after which the crew put the system into its designated U-shape. The system is now ready to start the cleanup.

The Ocean Cleanup system was designed by now 24 year old Dutchman Boyan Slat, who came up with the system in high school. It consists of a 600-m-long floater that sits at the surface of the water and a tapered 3-meter-deep skirt attached below. The floater provides buoyancy to the system and prevents plastic from flowing over it, while the skirt stops debris from escaping underneath.

Both the plastic and system are being carried by the current. However, wind and waves propel only the system, as the floater sits just above the water surface, while the plastic is primarily just beneath it. The system thus moves faster than the plastic, allowing the plastic to be captured.

Watch a video explaning the technology below.

The Great Pacific Garbage Patch is a floating garbage dump between California and Hawaii. It measures three times as big as France and contains an estimated 1800 billion pieces of waste.

The second video below shows the launch of the world’s first ocean cleanup system after its assembly at the yard in Alameda. Watch the system being transported through the San Francisco Bay, toward the infamous Great Pacific Garbage Patch.