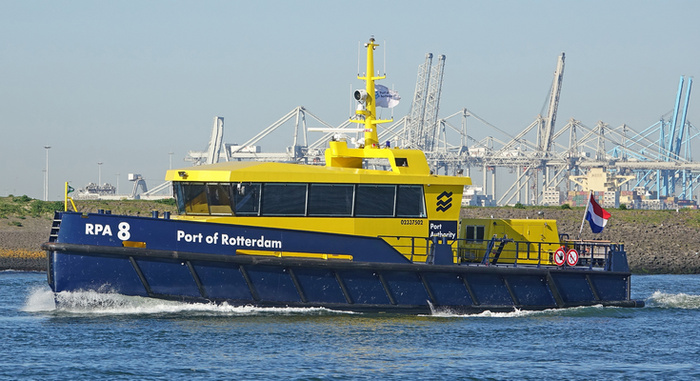 From six entries, the jury of the Maritime Award: KNVTS Ship of the Year has selected three nominees, one of which is the Port of Rotterdam's new hybrid patrol vessel RPA 8.

The RPA 8 is the Port of Rotterdam Authority’s new patrol vessel. It was designed, developed and built by the Kooiman Marine Group with the objective of delivering a vessel that can execute its tasks safely, smoothly and sustainably. The aluminium vessel, fitted with an innovative hybrid operating system, redefines the highest standards for this specific market segment.

Slow and Fast Using as Little Fuel as Possible

For a large part of the time, the ship operates at low patrol speeds. Ship inspections must, however, be carried out swiftly and safely, and in the case of emergencies, the ship has to be able to operate at high speed. In all of these conditions, the ship must operate with low fuel consumption and a low level of emissions. In addition, the ship must comply with the requirements set for the height of radiated waves, both at cruising speed and maximum power.

The Fast Displacement Hull developed by Van Oossanen, fitted with a Hull Vane, turned out to be the right platform for Kooiman to start the design. Considerable weight savings could be realised by constructing the hull in aluminium.

The Port of Rotterdam Authority was closely involved in the development and design of all aspects of the vessel; a cooperation that continued during the actual building of the ship.

The propulsion system has been developed in collaboration with Hybrid Ship Propulsion (HSP). With the so-called "Parallel Hybrid Operation system", the two installed propulsion trains can take over each other’s operation electrically. When only one of the two power trains is active, the diesel engine of the inactive unit may be switched off. The active power train will now drive both propellers; the first one direct and the second one electrically.

The low emissions that are associated with this operating system, in combination with the effects of the applied exhaust after treatment, result in emission levels that meet Stage V requirements with ample margin.

The RPA 8 is a patrol vessel that fits perfectly within the Port of Rotterdam Authority’s policy to create a sustainable port. With its delivery, the Kooiman Marine Group has proven to be a leader in its field.

Watch two videos of the RPA 8 below (by the Port of Rotterdam and Kooiman Marine Group).

The other two nominees, the RSD 2513 Innovation and TSHD Scheldt River, were featured on our website earlier this week.