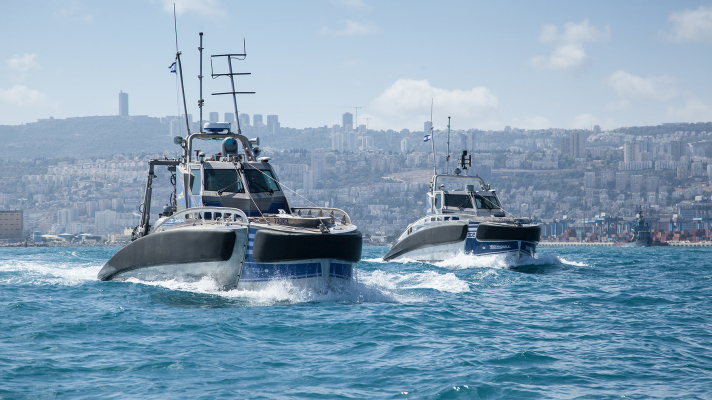 The Seagul-301 is the first of two prototype vessels that shipyard De Haas Maassluis BV (builder) and Ginton Naval Architects BV (designer) have delivered to Elbit Systems Ltd. These vessels can be deployed, both manned and unmanned, for various commercial and military duties, such as surveying, patrolling, security missions, incident management, and mine detection and neutralisation.

The innovative aspects are primarily its capabilities of unmanned and autonomous operation; duties which are now performed in manned condition may in future, depending on the development and ratification of legislation, be executed in unmanned mode.

Optimisation of the relatively large openings of the moonpools and the “hard chine planing hull” have resulted in a considerable reduction of the vessel’s resistance at high speed.

An exceptional achievement, according to the Ship of the Year Award jury.

Watch this award (and the Maritime KVNR Shipping Award) being presented to the winner:

In total, three ships were nominated for the award. The other two nominees were:

Every year, the Maritime Award: KNVTS Ship of the Year is awarded to a technologically innovative ship designed and (largely) built in the Netherlands. Entered ships are judged on design, economics, sustainability and impact on the environment, safety and design/construction process.

The award is presented at the annual Maritime Awards Gala, which took place last night (6 November) and combines the presentation of five maritime awards. Apart from the KNVTS Ship of the Year, these are the KVNR Shipping Award, Maritime Innovation Award, Maritime Designer Award and the Maritime RNLN Van Hengel-Spengler Award.