Ask, Challenge and Do Your Own Navigating 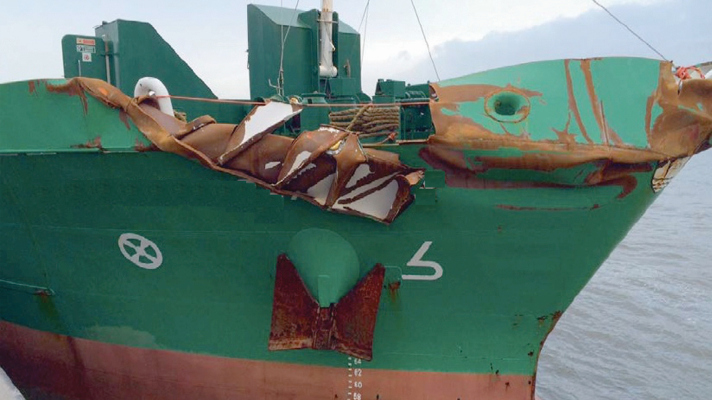 Never be afraid to ask about or challenge a decision, whether taken by a superior or even a pilot. Furthermore, as anyone can make a mistake, do your own navigating, don't just take someone's word for it. The latest Mars Reports show this may prevent accidents!

A selection of Mars Reports has been published in SWZ Maritime's September issue. You can now read the full report here.

A loaded suezmax dry bulk carrier (yellow vessel and track in diagram below) was approaching anchorage in good visibility and calm conditions. On the bridge was a pilot who had the con, the Master, second mate, third mate, helmsman and a lookout. The chief mate, bosun and an ordinary seaman were on anchor station forward. An anchoring position was assigned to the vessel by Vessel Traffic Services (VTS), about 1.5nm west of three other vessels already at anchor.

At one point the pilot ordered 20° starboard helm and then hard to starboard. This brought the ship away from the track leading to the assigned anchorage position, and between vessels one and two and headed towards vessel three, all at anchor.

A number of helm and engine movements were ordered and executed within a period of two minutes. Soon afterwards the pilot ordered the port anchor let go. With the anchor party holding on to six shackles in the water and the bulk carrier still doing five knots, they continued turning to starboard towards vessel three. As the distance between the two vessels decreased, the pilot ordered the engines full astern. As an impending allision became obvious, the starboard anchor was also dropped to lessen the impact. Shortly afterwards, the dry bulk carrier, still making 2.5 knots, made contact with anchored vessel three. Substantial damage was sustained by both vessels.

The official investigation revealed that essential information on the pilot’s intended passage and anchoring operations was not discussed during the Master-pilot exchange. The alternate anchorage position chosen by the pilot was not challenged by the bridge team. The investigation also found that the plotted positions of the vessel varied sharply from true positions as shown by the AIS and VTS recorded track.

This is indicative of inadequate monitoring and inaccurate situational awareness.

A general cargo vessel had to go to anchor near the arrival port, as the berth was unavailable. The winds were strong at force seven with gusts of force eight. Not long after anchoring in the northwestern corner of the anchorage, the vessel began to drag anchor under the influence of the strong winds and a current near two knots. The vessel exited the anchorage and was dragging its anchor into the nearby traffic lane. The Master weighed anchor and repositioned the vessel in the anchorage once again, this time in the southwestern corner, 0.8nm from a tanker already at anchor. This distance is typical for such a busy anchorage.

In the ensuing hours, each of these vessels dragged anchor in a northeast direction, becoming closer to each other. Eventually, the Master of the tanker decided it was prudent to heave anchor. Once the anchor was on board the vessel was swung to port towards the general cargo vessel with the intention of sailing clear. The vessels dragged anchor drifting ever closer to one another.

Because the tanker was in ballast and had hardly any speed, manoeuvring was hampered and the vessel’s movement was greatly affected by the strong wind and current, now acting fully on the vessel’s starboard side. The tanker was driven into the bow of the general cargo vessel – which was still anchored, but dragging – causing major damage to both vessels. Damage to the general cargo vessel.

A crew member left the bridge and was making his way down the external stairway to the boat deck. During his descent he fell down the stairs to the deck below, fracturing his left forearm.

On investigation, it was determined that the stairs were in good condition and had been fitted with grips. The victim was wearing all appropriate PPE including his safety footwear, which was in good condition.

The victim stated he was using the ‘trailing hand technique’ while transiting the stairs, although he had a radio in one hand. There were no radio sling/holsters onboard. A recently qualified crew member was on his first trip as 3rd engineer and had only a few days experience as the sole engineer of the watch (EOW). Keen to clear the outstanding planned maintenance, he asked the engine room cadet to complete the job of topping up the cooling system on one of the four main engines. This was a job the cadet had previously done, but only on an engine that was not running. In this instance, the engine was running and on-line.

The engine had both a lower and upper temperature header tank and both required topping up. As the cadet removed the cap from the upper temperature header tank, water at 90˚C and 7 psi was released spraying across both of his forearms. First aid was quickly administered, but the mishap resulted in 2nd degree burns to both of his arms. The vessel diverted to a nearby port and the cadet was released to the local hospital before he was repatriated home. In darkness and under pilotage a car carrier was outbound in a river estuary behind another outbound vessel. The car carrier was to the north of the channel and of the intended track. The pilot informed the Master that he would try and manoeuvre the ship further to the south.

At the time an approaching vessel, an inbound ro-ro ferry, was in clear sight. The pilot of the car carrier informed the Master that they would pass the ro-ro port to port. As the distance between the two vessels diminished, now at 0.97nm, the ro-ro continued on a heading of 295° and the car carrier’s pilot ordered to steer 115°.

The ro-ro’s Master decided to reduce speed and put the telegraph to ‘half ahead’, which gave a speed through the water of approximately 9kts. At about the same time the car carrier’s pilot ordered ‘starboard 20’. As the car carrier’s heading reached 125°, the pilot ordered midships, then 135°. Accordingly, the helmsman arrested the vessel’s swing to starboard to steady the vessel as ordered. The car carrier’s Master expressed concern over the developing situation and the pilot explained to him that both vessels were experiencing drift.

Shortly thereafter the ro-ro’s bridge team realised that the car carrier was not turning to starboard as quickly as they expected and that emergency measures were needed. Full starboard helm was applied and the engine was set to full astern. Very shortly after, the car carrier’s Master also realised emergency action was necessary – he shouted ‘Go to starboard’, followed by ‘Midships’ and then ‘Hard to port’. Fourteen seconds later the two vessels collided port bow to port bow on headings of 288° and 163° respectively.