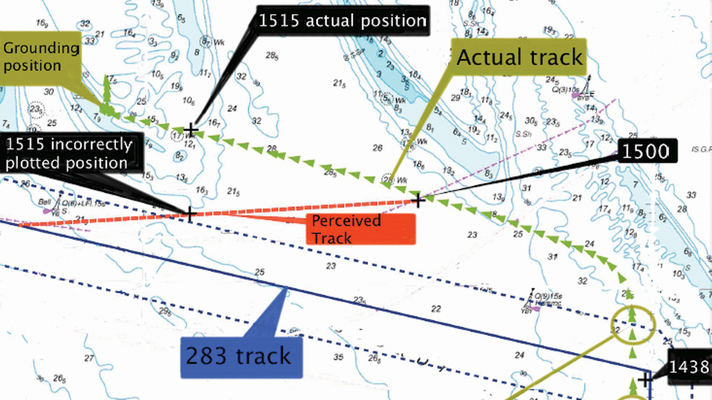 Mars (Marine Accident Reporting Scheme) Report is one of the regular sections of SWZ Maritime. The reports are also published online, as they may prevent other accidents from happening.

Mars Reports cover all kinds of maritime incidents such as (near) collisions and groundings, accidents with tools, falling objects injuring crew and accidents with rescue boats. You can find the latest reports below.

While in port, several cargo hold hatch cover pontoons had to be shifted from forward to aft. An officer was operating the hatch cover gantry crane and a deck crew member was standing nearby, but at one point, the crew member was not within the field of view of the operating officer. It appears the crew member was standing with his back to the oncoming gantry, so he did not see the gantry nor the flashing warning lights to indicate its operation. Additionally, the port’s noise may have drowned out the ringing of the gantry alarm.

The company investigation determined, among other things, that safety is not achieved through rules and procedures alone, but also depends on the actual actions of people. Some of the solutions brought forward were:

In darkness and good visibility, a ferry (196 m in length) was making a routine entrance into one of its normal ports of call. There was a light northerly current and SSE wind of about 20 knots. As the ship approached the port at a speed of 14 knots, the OOW initiated the turn to port to follow the fairway using the autopilot and a preset turning radius of 0.3 nm. The autopilot was set in “heading mode”, which meant that the drift was to be corrected manually. After the turn, the first green buoy encountered was passed somewhat closer than planned and a little beyond the intended route. At that moment, the master told the OOW he was manually taking over the steering and engine control on the starboard bridge wing. He then disengaged the autopilot. The ferry drifted from its planned course and grounded.

Soon thereafter, the OOW indicated to the master that they had drifted from their planned course and the master affirmed. He applied starboard rudder in an attempt to bring the stern away from the starboard shore before the aft part of the vessel had completely passed the buoy. The master then looked forward and perceived that the next green buoy was straight ahead, so he put the rudder to port and crossed the engines to place the ship on the correct side of the buoy. He then saw the green buoy disappear under the vessel at approximately midlength. The vessel made contact with the bottom shortly thereafter.

Editor’s note: Entering a port, even a familiar one, where the room for error is so small, given the size of the vessel, the speed of 14 knots, and that it was night time, is also cause for concern here. Night navigation and manoeuvring is more tricky than in daylight; visual perception of speed, distance and general situational awareness are less than in broad daylight.

Deck crew were preparing for port arrival. It had been raining and the deck was wet; as a crew member was pulling a messenger rope he slipped while standing on a part of the deck that was painted yellow to indicate a snap back zone. He landed on his left hand, with the full weight of his body coming onto his wrist. This caused a splintered fracture of the radius wrist bone.

The deck where the crew member slipped was not treated with a non-slip material. An earlier assessment had determined that to avoid abrasive damage to the HMPE ropes used for mooring it was preferable to leave the snap-back zones smooth.

Editor’s note: This report is a good example of how risk assessments should be ‘living documents’. A risk assessment must never be cast in stone and should be reviewed regularly, and especially after an incident or accident. In this case, the company wisely reviewed their earlier assessment and corrected the deficiency.

With the vessel on a northerly course, at 1430 the OOW fixed and plotted the vessel’s position, but did not calculate the predicted time for the next course alteration. About seven minutes later a radar alarm sounded indicating that the vessel was five cables south of the waypoint marking the start of the 283° track. The OOW acknowledged the alarm and fixed the vessel’s position at 1438 using GPS and a range/bearing from a nearby Racon buoy. He then continued with his chartwork, completing corrections on some newly delivered charts.

At 1441, the radar alarm sounded again, this time indicating the vessel was crossing the northern boundary of the five cable safety corridor on the 283° track. Realising that he had missed the turn to the 283° course, the OOW came to port and steadied the vessel on a heading of 270°. At 1500, the OOW recorded and plotted a fix, which showed the vessel was significantly to starboard of the planned course; he then adjusted the vessel’s heading further to port, to 267°.

At 1515 the OOW took a GPS fix, but incorrectly plotted it one mile to the south of the vessel’s actual position. At 1521, the vessel’s speed started to reduce and the bow swung to port as it grounded. Schematic overview of the vessel’s route.

When the relieving OOW took over the watch, he did not check to identify what navigation marks would be made or the potential dangers that lay ahead. Neither did he make an assessment of the expected effects of tidal stream or wind.

When the OOW eventually altered course to port, the vessel was already well to starboard of the 283° track. His choice of 270° and then 267° were not effective in regaining track. When plotting the fix at 1515, the OOW’s unfounded understanding of the situation was that the vessel was regaining the track. As a result, it is highly likely that he plotted the fix showing where he perceived the vessel to be based on this incorrect assessment.

Yet, other clues that the vessel was not regaining the planned track were available. Had the OOW correlated visual observations with the chart, it would have been readily apparent that a nearby buoy on the port bow should have been to starboard. Additionally, the S-band radar and map function would have clearly shown the vessel’s actual track diverging away from the intended track as seen in the diagram overleaf.

During his watch, the OOW spent long periods of time at the chart table correcting and preparing the newly delivered charts. With responsibility for navigation, it is understandable that he felt a strong duty to prepare the charts for the passage ahead. However, this task distracted him from his primary role of maintaining a lookout and monitoring his vessel’s passage, and resulted in him missing the planned turn to port. The grounded position shows quite some deviation from the planned course.

All of these factors meant that the OOW did not have continuous and accurate positional awareness. Some of the findings, as edited, of the official report were:

The vessel was underway without a complete berth-to-berth passage plan.

Editor’s note: Good navigation results are unlikely if the OOW is preoccupied with other duties such as chart corrections. Close coastal navigation requires one hundred per cent of your focus and attention.

From US Coast Guard Safety Alert 14-14

While boarding a vessel a pilot suffered a concussion; a modified embarkation ladder hull magnet device disconnected from the ship’s hull and struck him on the head. Unfortunately, this was not an isolated incident. Incidents with injuries have occurred on other vessels at several different ports. In each of those instances the hull magnets had been modified prior to the accident. Moreover, in all cases, after restoring the hull magnets to their original design no further problems were experienced. Hull magnets are easy to operate devices and when two of them are positioned correctly they provide substantial holding force. The handle of the magnet is also a lever and enables easy release from the hull of the vessel. Proper use of the magnets is shown in the image below left.

In the incidents where the magnets unexpectedly detached from the hull, only one securing magnet was used, placed between the rails of the ladder and alterations (remote release device) that deviated from the manufacturer’s design had been made (image below right).

More reports are needed to keep the scheme interesting and informative. All reports are read only by the Mars coordinator and are treated in the strictest confidence. To submit a report please use the Mars report form and send it to mars@nautinst.org.