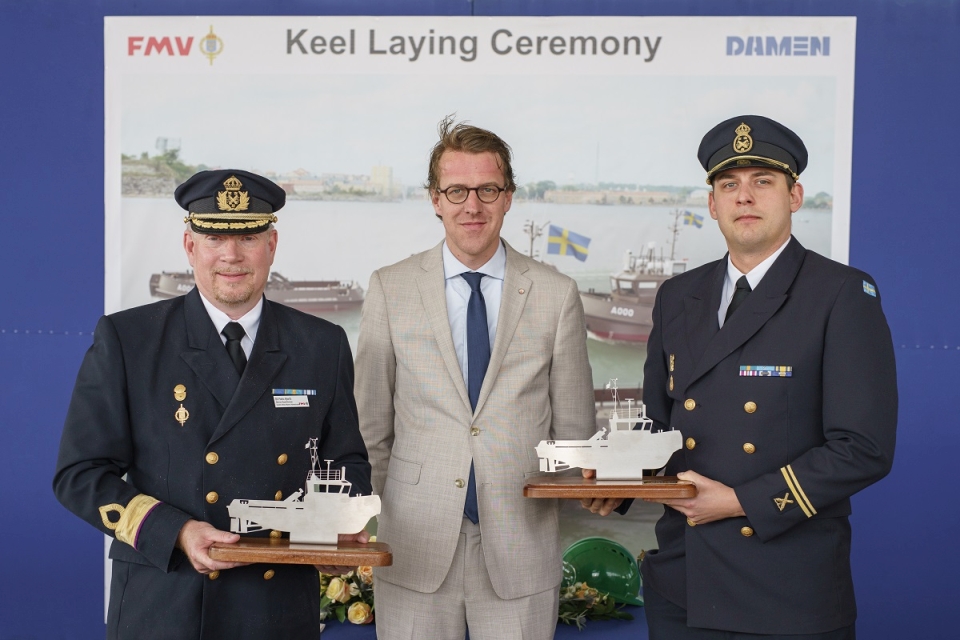 At Albwardy Damen, the keel laying has taken place for a series of Stan Tug 1706 ICE vessels. Four customised ice class harbour tugs are under construction for the Swedish navy to be delivered to Sweden starting in 2023.

The keel laying was performed by Swedish defence materiel organisation FMV Director Naval Division Patric Hjorth. The ceremony started with three coins placed in a stainless steel plate: a Swedish Crown, a Dutch Rijksdaalder and an Emirates Dirham. This symbolises the co-operation of the three countries in manufacturing the special tugs. The plate with the coins was then welded by General Hjorth to the hull construction.

General Hjorth memorised the naval tradition of putting coins in a vessel for good luck: ‘In the days of wooden sailing vessels, ship builders placed a coin on the keel under the mast before it was raised. Today, we like to keep up this tradition to honour and maintain the skills of the seafarers that developed the art of navigation and safely sailing a vessel under all circumstances.’

The four tugs as ordered by FMV are based on the Damen Stan Tug 1606. The Defence organisation ordered an extensive range of equipment to be installed on these vessels and had special requirements for operational capabilities. Therefore, the design of the tugs was lengthened to 17 metres.

The hull is capable of navigating through ice, as the vessels will also be active in northern harbours along the Swedish coast. They are capable of operating in temperatures as low as -20°C. The wheelhouse is equipped with double glazing and high capacity heating is installed. Navigation lights will be heated to prevent ice and snow blocking the light. Winter days have daylight only for a few hours at northern latitudes. The hulls will be protected by an extra robust coating system to withstand the chafing of ice along the water line.

FMV ordered the four Stan Tugs 1706 with an option for two extra.